CYCLING IN THE PYRENEES

The Pyrenees is a mountain range that stretches from Cap de Creus, in Catalonia, to Hendaye, in the Basque Country.

In the Pyrenees you will find legendary mountain passes of the Tour de France and the Vuelta a España such as the Col du Tourmalet, Col d’Aspin, La Gallina, Coll d’Ordino, Vallter 2000 or La Creueta.

The Pyrenees mountain range is ideal for cycling during the holidays

The Pyrenees, with an average density of 235 inhabitants per km2, offers quiet and spectacular roads where you can enjoy the most epic cycling experience and beautiful landscapes as well as tourist and sports facilities. The recommended season for cycling in the Pyrenees is from May to September, in which you can enjoy sunny clear skies and pleasant daytime temperatures.

A classic ascent in the Girona region that surprises cyclists for both its difficulty and its beauty. It’s not surprising that it has been the end stage of “La Vuelta a España” and the “Volta Ciclista a Catalunya” on several occasions. Vallter 2000 has a total length of 12 kilometers and reaches 2,155 meters above sea level at the top of the ski resort.

Gateway to the Pyrenees from the Barcelona region, Coll de la Creueta is one of the longest and hardest stages in Catalonia due to its 21 kilometres. It has been decisive in crowning the champion of the “Volta Ciclista a Catalunya” on multiple occasions.

With 12 kilometres and 600 meters of positive elevation, it links the Volcanic Zone of La Garrotxa in Girona with the Pyrenees. Its difficult access make it an extremely quiet port. This tranquillity and the spectacular landscape make it magical for cycling lovers who also often take advantage of the route to visit Beget, a must-see medieval town located at the beginning of the ascent.

One of the most unknown ascents in Catalonia. Parallel to the Coll de la Creueta, it ascends to the Tossa d’Alp mountain range, the natural border between the Pyrenees and the Pre-Pyrenees. The road, is cut off at its top, which makes it a favourite destination for many cyclists who enjoy the landscape in peace. The route, which starts from Bagà, is 19.3 kilometres long and has an average slope of 6.3% reaching an elevation of 1,285 meters.

Another mythical ascent in the province of Barcelona that has been the final stage of La Vuelta a España in three occasions. Leaving Berga it is 16.5 kilometres long, has an average slope of 7% and a total positive elevation of 1,300 meters. 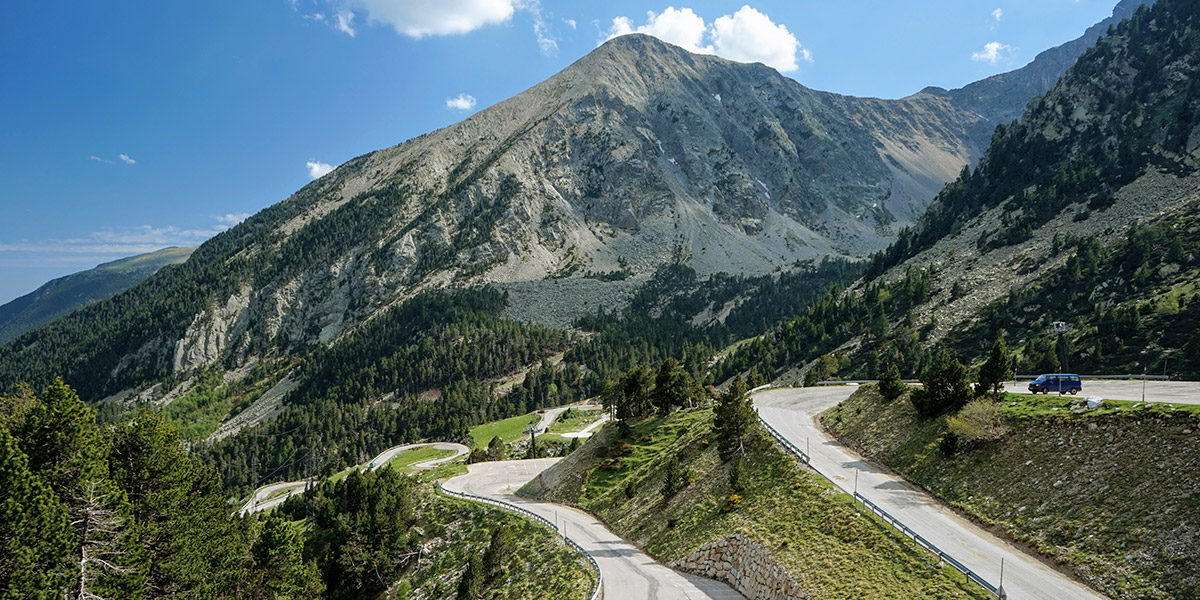 The impressive Coll de la Gallina, has been a decisive mountain pass in several editions of La Vuelta a España. No wonder professional cyclists based in the area use its steep slopes as a training ground and it is a regular track for Purito Rodríguez, Andorra’s great cycling ambassador. Coll de la Gallina is 11,9 kilometers long and has an average gradient of 8,3%.

Coll de Beixalís is a tough climb paved in 2015 to be featured in that edition of the La Vuelta a España. It was such a big succees that it became also featured in 2016 Tour de France edition. The road starts off with an extremely steep slope to reach staggering elevation gains; it then gradually becomes easier on the legs until reaching the top, at a height of 1,795 metres. Coll de Beixallís is 6,6 kilometers long and has a terrible average gradient of 8,4%.

The ascent to Coll d’en Cabús starts in La Massana. The category-1 mountain pass will take us to Catalonia’s natural border. The last kilometres will offer us impressive views of the peak of Comapedrosa, the highest mountain in Andorra. It has a total length of 15,6 kilometers at an average gradient of 6,2% and a positive elevation of 1,052 meters.

Andorra and Catalonia are the ideal destinations to relish the adventure of cycling in the Pyrenees. In both locations you will have the opportunity to enjoy amazing mountain passes, a wide range of leisure activities as well as a rich gastronomy based on top quality local products. If you ever dreamed to ride where professionals cyclists train, take a look at the Pyrenees cycling routes we have designed for you and challenge yourself in the Pyrenean tarmac with your group of friends.